As part of With a Terrible Fate‘s ongoing one-year anniversary celebration, I promised to continue my work analyzing Nier. If you’ve read my first extended analysis of the game and its identity dynamics, then you know that I hold this game in high regards both personally and analytically. For my second article on the game, I wish to take a somewhat different approach: I’m going to take a fairly common criticism of the game, and use it as a jumping-off point to discuss the dynamics of video game narratives more generally. 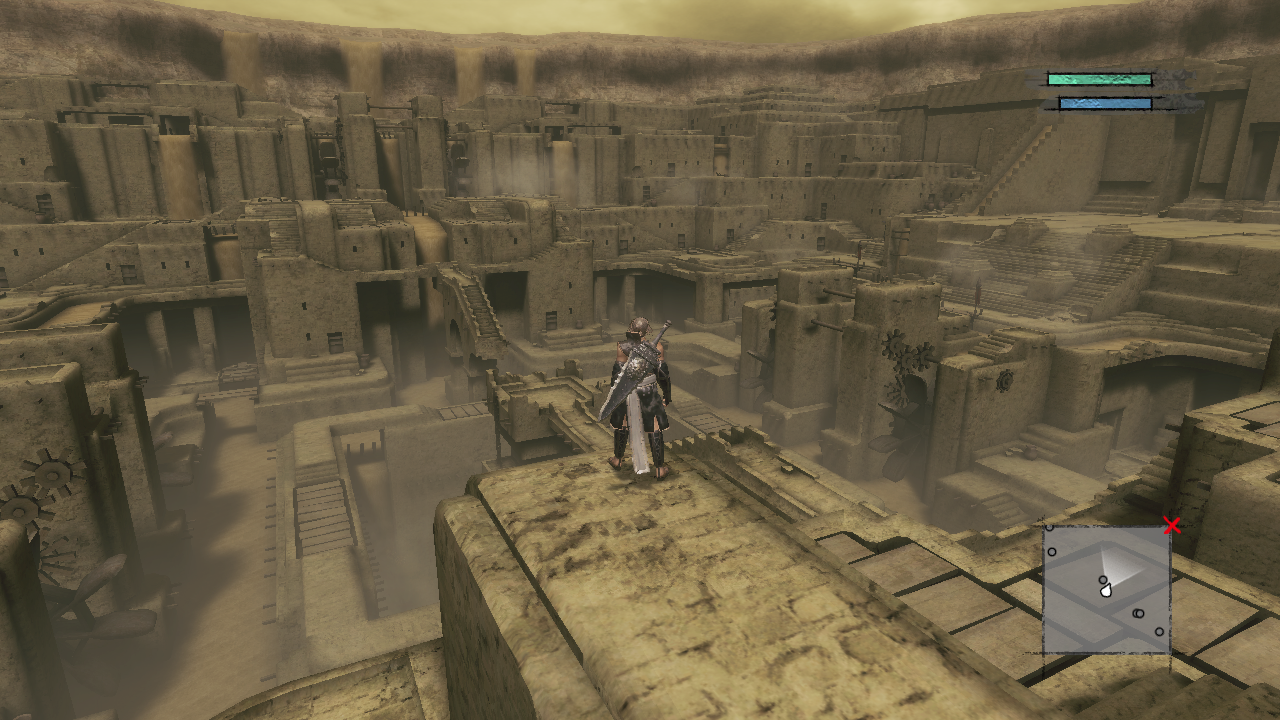 The criticism about Nier is this: “Say what you will about the game’s story, but the game’s actual world design is largely stark and bland. It is therefore difficult for a player to ‘get through’ the game because the player has little desire to explore and discover more of the world; and this is a failure in game design.”

At first glance, it seems obvious that video games ought to have immersive, exciting worlds that are fun to engage–after all, you might say, why else would we be motivated to pour countless hours into exploring and virtually living in those worlds? I want to convince you that this seemingly obvious claim is not so clear-cut. In particular, the claim rests on the premise that video games ought to always be fun to play, in some sense of “fun to play” that we will need to specify.

So ultimately, this article on Nier is concerned with one foundational question about the aesthetics of video games: Should video games always be fun to play? While a comprehensive answer to this question is beyond the scope of this piece, I hope to offer readers reasons why answering “no” to this question is more plausible than they initially supposed.

First, I need to specify what I mean by a game being “fun to play.” If the question is merely whether a video game ought to be something that its players appreciate, then there is no interesting question to answer– the answer to that question, I take it, would obviously be “yes.” But there is a distinction between appreciating a work of art and having fun when engaging that work of art. For example, most people have a favorite tragic novel, film, or play–say, Shakespeare’s King Lear. A theatergoer might certainly appreciate King Lear; however, given how tragic it is, and how emotionally taxing it is on those in its audience, it seems unlikely that the theatergoer would call the act of seeing King Lear fun.

For this reason, I define a game being ‘fun to play’, roughly, as ‘the dynamics and representational content of the game being such that the player actively takes pleasure in engaging them’. This is a species of a conception of ‘fun’ that one can apply to artistic media more generally, where a work of art is ‘fun to engage’ just in case its dynamics and representational content is such that its appreciator takes pleasure in engaging it. Some examples of ways in which art can be fun in this way include: a well-written novel with rich language that the appreciator takes pleasure in reading; a film with visual detail and an immersive soundtrack in which the viewer takes pleasure; and a video game with a varied and detailed world that the player takes pleasure in exploring. Note that even famously frustrating games such as the Dark Souls series can be fun to play on this definition: aside from its difficulty, Dark Souls is known for stunning, varied, detailed environments, and a rich soundtrack accompanying boss battles.

When we think about artistic media other than video games, it seems clear enough that there are worthwhile pieces of art than are nevertheless not particularly fun in this way. Waiting for Godot is one of the most celebrated plays of the 20th century, yet its setting of a lone tree is not especially pleasurable to engage. One Day in the Life of Ivan Denisovich is a novel chronicling a single day in the life of a prisoner in a Soviet labor camp; not only are the details of this day tedious (i.e. not fun), but it also seems that this tedium is part of what makes the novel worthwhile: that is, its form reflects the reality of generic days in a labor camp. Yet there is a question, at first glance, as to whether or not video games can be worthwhile without being fun in this way. After all, if video games are truly games, then shouldn’t some degree of fun inhere to the medium? This is what I answer “no” to, using Nier as a case study. 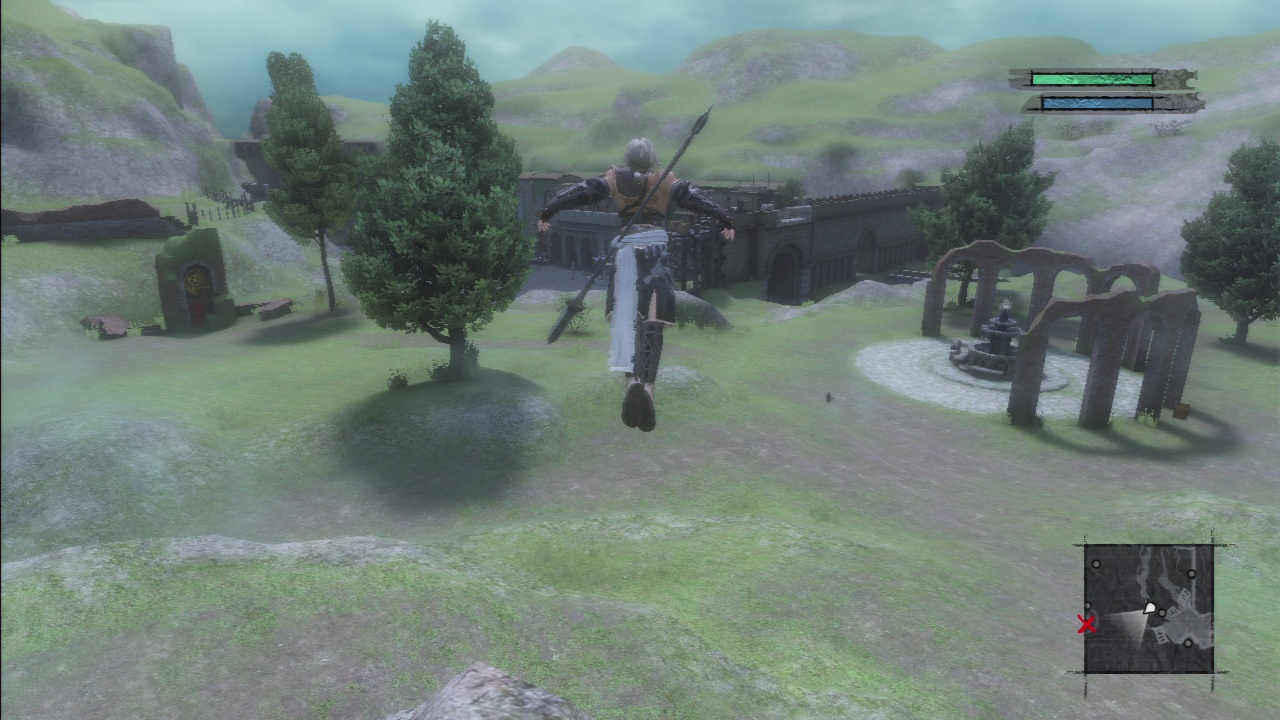 Despite my appreciation of Nier, I agree with the general criticism that its world design is not especially engaging, particularly by the standards of modern video games. Compared to a game such as Skyrim, Fallout 4, or Xenoblade Chronicles X, the world of Nier is small and has relatively little going on in terms of optional areas and quests for the player to explore. The world’s landscape is also rather monotonous, offering few markedly distinct regions across the world map. If you buy into the game with an expectation that it will offer you an expansive world to explore, then you will be disappointed–but this is not why you should buy into Nier. 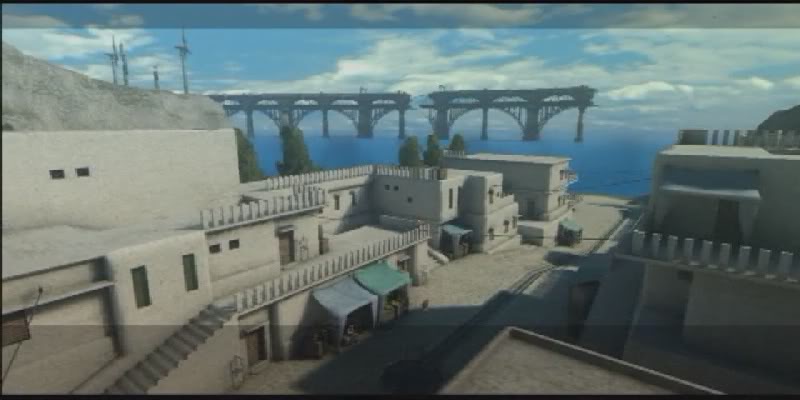 The world of Nier is post-apocalyptic: it takes place ages after humanity was ravaged by a cursed disease. As such, we would expect much of the landscape to be desolate in order to cohere with the the rest of the narrative; but of course, this in and of itself does not excuse the monotony of Nier‘s world (cf. Fallout 4, Darksiders 2).

However, the narrative of Nier is more complicated than a run-of-the-mill post-apocalyptic scenario. It is a story steeped in mysteries and metaphysical complexities: the souls of humans are conveyed across time through countless bodily shells (Replicants) in order to escape extinction by a pernicious disease. And this, I contend, is what drives the poignancy of the father-daughter relationship between Nier and Yonah: across countless iterations — human, Shade, and Replicant alike — their bond remains immutably absolute. In this way, it transcends the tedium of unending cycles of renewed corporeal existence. I raise this point here not simply because it is one of the more memorable aspects of the game’s narrative, but because this is what justifies the general monotony of Nier‘s world. 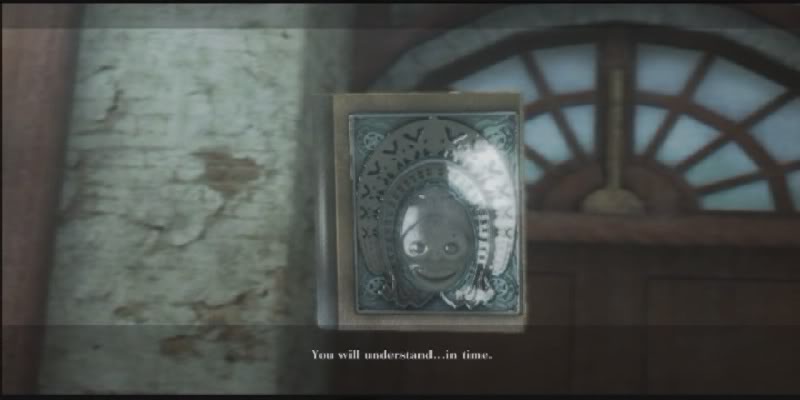 Nier has four unique endings, meaning that the player has to play through the majority of the game’s story at least four times in order to grasp the entirety of the world’s mysteries. In particular, the entire nature of Shades as once-human entities is veiled until the player makes her second journey through the game’s story. In other words, in order for the player to fully understand the nature of the game and its world, she must go through the same sort of cyclical tedium that Nier and Yonah endure.

This is not to say by any means that the entire game is tedious–the story itself, as I have discussed here and previously, is intricate and riveting. The point is merely that the act of the player repeatedly engaging a tedious world in order to uncover its secrets and the depth of the father-daughter bond recapitulates the propagation of Nier and Yonah’s complicated, mysterious journey with one another throughout a desolate expanse of space and time. 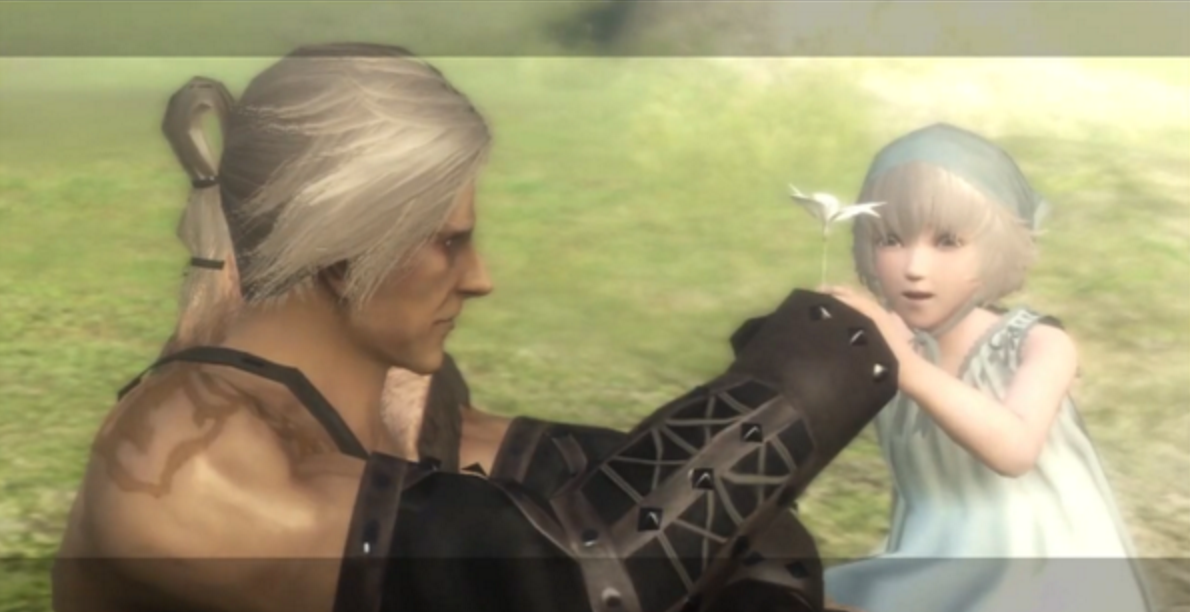 This parallelism between the experience of the player and the experience of Nier is more than a happy side effect of game design: it is what binds the player to the game’s narrative and immerses her in Nier‘s world. Video games are an interactive medium: the relationship between the player and avatar matters; in fact, as I have discussed in the cases of Majora’s Mask and Xenoblade Chronicles, we often need to understand this relationship before we can attempt to understand the game at all. So it’s neither coincidental nor superfluous that in a game obsessed with identity and matter of who is controlling what body, the player, who controls Nier, shares experiences qualitatively similar to Nier’s. The relationship between avatar and player coheres with the metaphysics of the game’s universe, where Gestalts (the true humans) and their Replicant vessels can only recombine entirely when there are no differences between their characters: the unity of the player’s experiences and Nier’s experiences, in other words, ground the ability of the player to control Nier as an avatar within the context of the game’s narrative.

The result of this is that the cyclical monotony of the player’s engagement with the world of Nier actually forms the basis of the game’s aesthetics: the player is able to transcend the world of the game in conjunction with Nier as the secrets of the story unfold, and the depth of Nier’s bond with his daughter is revealed. It follows that the game’s narrative dynamics could not work as well, on a foundational level, if the game were “fun to play.”

Note that, although this argument endorses video games being worthwhile without being fun to play, its scope is limited. I am not endorsing every tedious video game mechanic as aesthetically worthwhile–mechanics such as the need to mindlessly play a slot machine for hours in Final Fantasy XIII-2 in order to experience a hidden extra ending to the game’s story. The reason why a monotonous world works in the aesthetics of Nier is because it fundamentally unites the experience of player and avatar in a narrative that places a premium on the value of this relationship; in the absence of such narrative integration, it is not obvious to me that any similar sort of monotony would be justifiable. 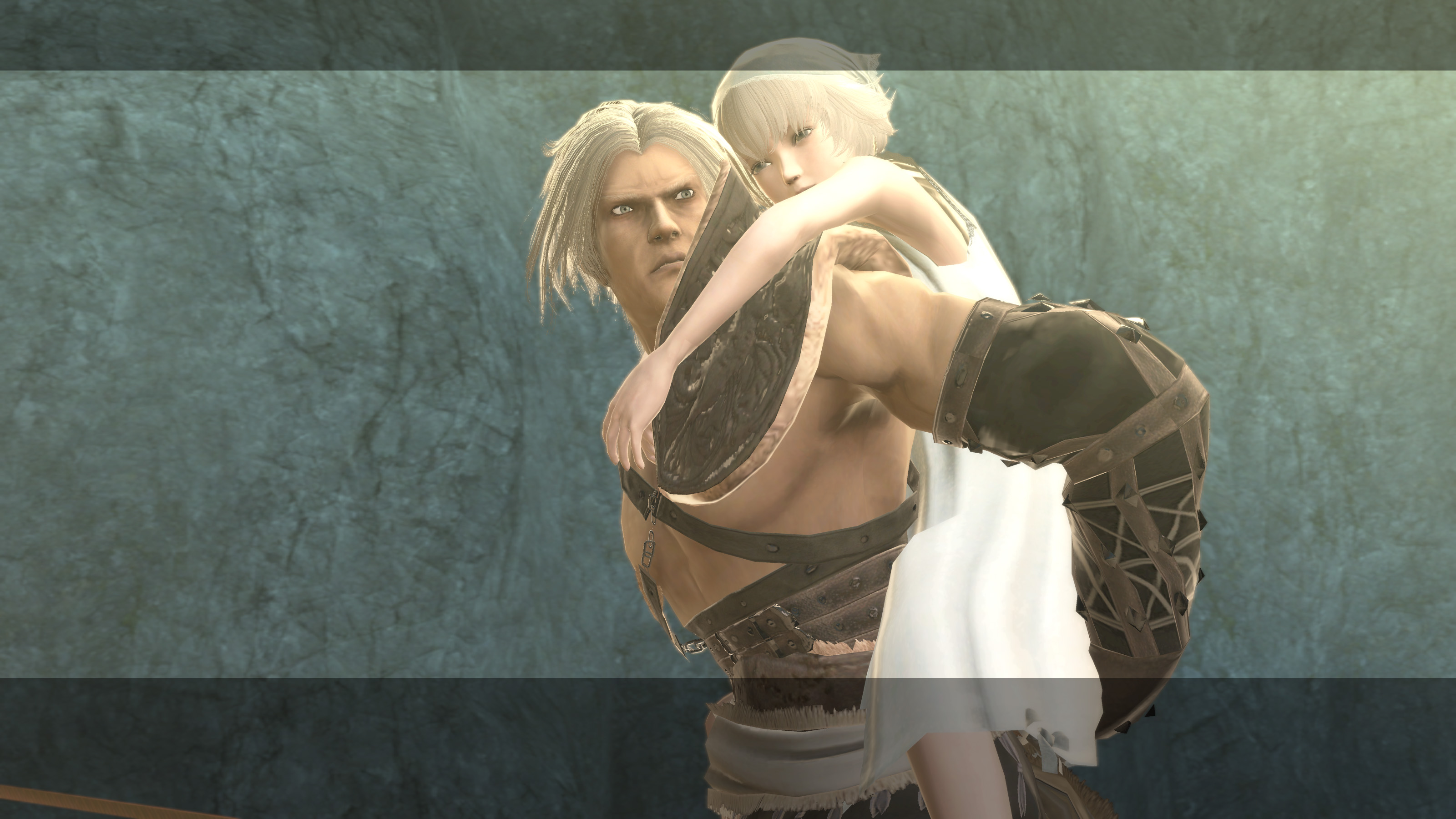 As I said at the outset, the goal of this piece was not to definitively show that video games need not always be fun to play–rather, my aim was to argue in favor of video games not needing to always be fun to play. The kind of artistic value conveyed by works like Nier would simply not work if the game’s world were fun to engage; yet the game’s narrative, in virtue of the relationship between player and avatar, allows for a special kind of transcendence than can hardly be ignored on account of its not being “fun.” I see this as evidence that video games, just as much as novels and films, can be artistically valuable without being fun to engage. And, more to the point, vast and various universes within games, when poorly executed, can sometimes end up detracting from the story and aesthetic fundamentals of a game–but that’s a discussion for another time.