There are several approaches one can take to interpreting an aesthetic work, but one major dichotomy in methods is the difference in applying a certain interpretive paradigm to a work of art, versus constructing a mode of meaning out of the aesthetic object itself. So far, I have mainly implemented the latter approach in analyzing “Majora’s Mask”; in this post, I wish to turn to the former of these methods in order effort to approach the game from a fresh perspective.

It’s sometimes said that most games coming out of Japan reflect heavy Shinto influence, heavy Buddhist influence, or both. Without taking a stance on authorial intent, I have observed that the whole of “Majora” fits quite cleanly into modes of Buddhist philosophical discourse, which is what I want to convince you of in this post. I will take up other such interpretations in future posts, which will, I hope, show that Buddhism is by no means the only useful lens to impose upon our perception of the game. Nonetheless, we will see that it is a natural stance from which to begin this mode of discourse.

The Buddhist reading of “Majora” takes place in two parts: first, I overlay the Buddhist conception of the universe as samsara onto the literal content and metaphysical structure of the world of Termina; secondly, I compare the path of Link through Termina to the Buddhist model of the Bodhisattva, an Enlightened being of pure compassion. Lastly, I offer remarks on what theses the Buddhist concepts of samsara and ‘skillful means’ put us in a position to make about the game.  (This analysis is by no means a complete Buddhist reading of the game, but gives a flavor of a theme that will return in weeks to come.) 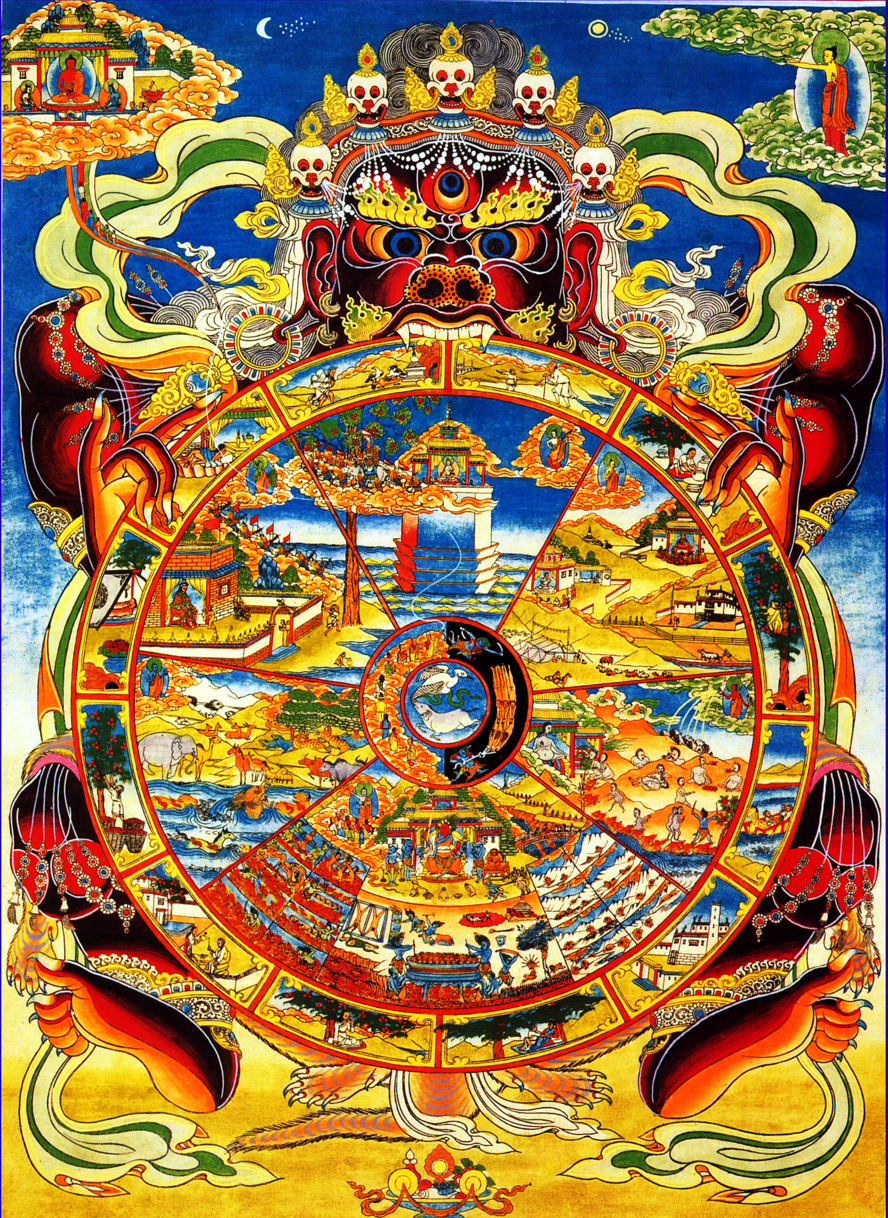 Buddhism conceives of the universe as ‘the wheel of samsara,’ literally meaning ‘wandering’; this describes six unique walks of life into which souls are born, live, die, and are reborn through reincarnation. As long as people are bound by suffering to the primitive forces of hatred, greed, and ignorance, they cannot escape the cycle of rebirth in samsara and achieve peace. Like the return to new incarnations within samsara, the structure of Termina is always ending yet always being reborn through Link’s use of the Song of Time in order to instantiate new three-day cycles leading up to the apocalypse; the iterative metaphysics of Termina, then, matches that of rebirth within samsara.

Yet the analogy goes deeper than this, for beyond being cyclical, the Buddhist conception of time, the mahakalpa, describes cosmic decline and renewal. Just so, the cosmos of Termina is in decline by virtue of its ultimately unavoidable apocalypse, which we have described previously. Though we will return to Link shortly, it is worth noting here that under this interpretation, his quest is fundamentally a fight against the cosmic order, as he attempts to save everyone in spite of cosmic decline.

So much for time. What is just as salient, though, is that all six walks of samsara are represented within the universe of Termina. I enumerate each of the six points of comparison below. 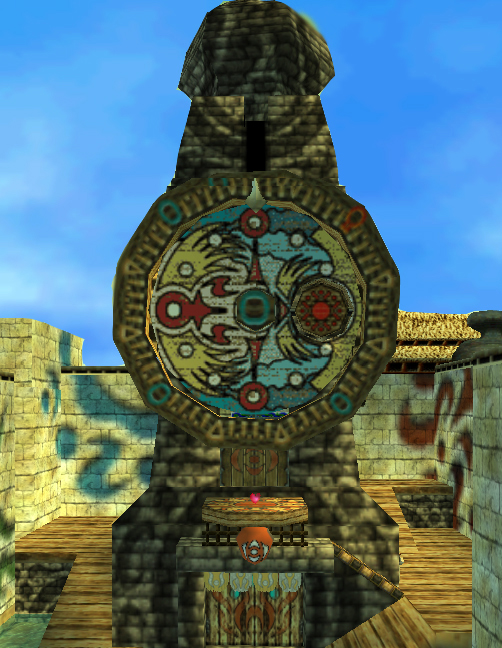 What are we to make of Link within this Buddhist framework? The goal towards which the narrative directs Link is unequivocal: save everyone. There is in Buddhism a ready analogue in the Bodhisattva, an Enlightened being who refuses to fully liberate himself from the cycle of samsara until every single other sentient being has been liberated from samsara. These agents of compassion travel and choose to be reborn all over the realms of samsara, in order to save as many people as possible. This is precisely the goal I described regarding the side quests of “Majora”: the entire story of Termina is told by the suffering of individuals, and the choices made by Link to save them.

Yet I have also observed that Link cannot save everyone in Termina in a single three-day cycle. In my own theory I have worked out possible explanations for this dynamic of the game; but it also lends itself to particular implications when we are working within a Buddhist framework. I have already offered an argument for each three-day cycle functioning as its own discrete timeline, and this coheres with the Buddhist framework because we can interpret each timeline as a unique incarnation of people in samsara. People are reincarnated into different walks of samsara, based on the actions taken in past lives (karma) and the general influence of suffering, it follows that the entity manifested as the mailman (as an example) in one timeline is not necessarily the same entity perceived as the mailman in another timeline.

This is important because, in the Buddhist framework, the people of Termina actually can be saved by Link’s intervention; what explains the reiteration of their problems in the next three-day cycle is the mere fact that another entity mired in samsara has been reborn in that same place. So, although Link can meaningfully save people, it is impossible for him to save everyone in the universe. This is compatible with the Buddhist notion that because so many beings and so much suffering exist in the degenerating world, it would take a cosmically unfathomable amount of time to liberate all sentient beings.

Link can acquire all masks as proof of his compassion, become the Fierce Deity, defeat Majora, and let the credits roll, but I have said before that this sense of completion is a false one. The Buddhist framework is useful because it does explanatory work in helping us understand this false sense of completion: the Fierce Deity is a God, and a characteristic of a God realm is ignorance of the profound suffering of the world. Thus the Fierce Deity, slaying Majora, would falsely believe that the world was freed of suffering—yet returning to the realm of humanity, it becomes apparent that this is only illusory. 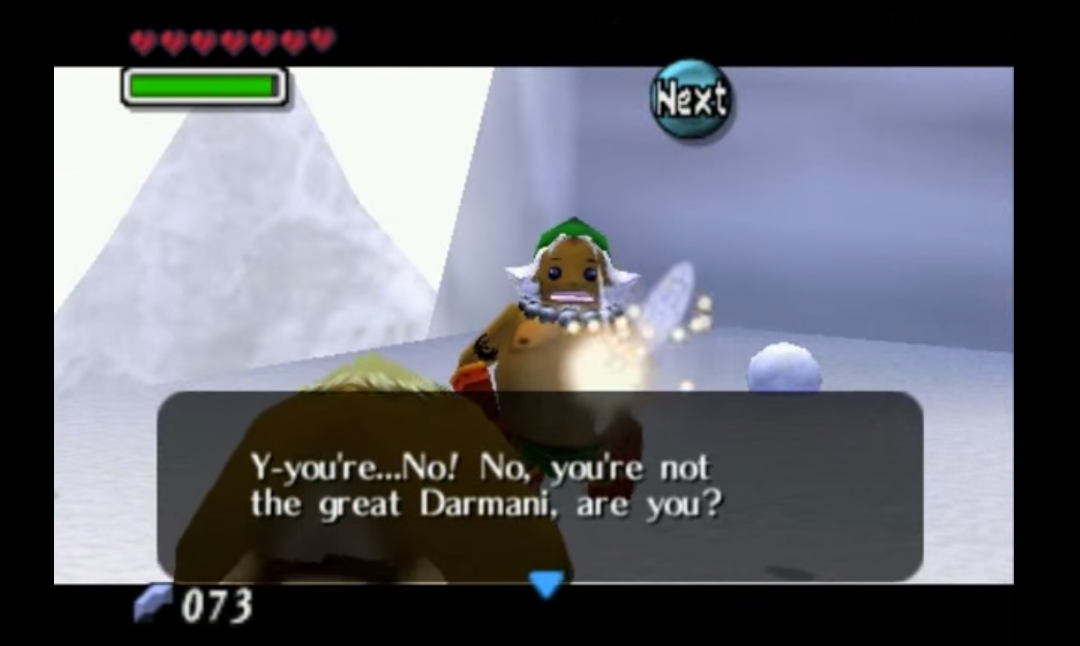 What do we glean in particular from a Buddhist reading of “Majora”? There are two directions we can consider here.  The first is that an account of Link as a Bodhisattva would give us uniquely useful machinery for explaining exactly why he is so dependent on masks.  The philosophy of Buddhism avails itself of a technique called ‘skillful means’; roughly glossed, this means that, in order to teach the same thing to different people, one must teach using methods particular to the individual.  Skillful means can sometimes even explain apparent lies and deceit, when an Enlightened and compassionate teacher implements them for the sake of bettering another life.  So, for example, we might rightly be confused as to why Link poses as Darmani to his beloved Goron tribe that mourns him; skillful means would succinctly explain that Link needed to deceive them in order to gain access to the Snowhead temple, where he could free the Giant and restore balance to Snowhead — or, alternatively, that for the Gorons to ultimately be healed of their pain and achieve peace, they needed at that moment to see the one for whom they yearned. 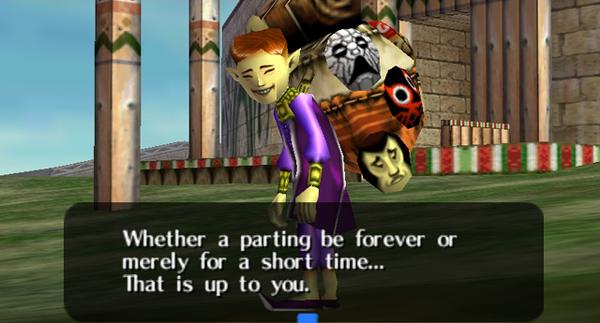 The second direction to go is to consider the famous, final address delivered by the Happy Mask Salesman to Link, as the game is ostensibly ending: “Whenever there is a meeting, a parting is sure to follow. However, that parting need not last forever… Whether a parting be forever or merely for a short time… That is up to you. With that, please excuse me… …But, my, you sure have managed to make quite a number of people happy. The masks you have are filled with happiness. This is truly a good happiness.” We can understand why the Salesman refers to Link having made “quite a number of people happy”: it is impossible for him to have made all sentient beings happy, but he can make as many as he wants happy without an upward bound. The art of meeting and parting goes hand-in-hand with the Bodhisattva vow: without grasping or holding on to anything, Link has a literally infinite number of opportunities to encounter the different beings living out the same tortured roles, genuinely know them, and ultimately save them. Link is the compassionate hero whose compassion lies in the action itself, rather than in the end state beyond all action.

Hi, GoldenBurner! Funny enough, as you mentioned the confusion caused by similar names in your comment, it seems as though the origin of your concern is in a linguistic confusion of this kind: while there are such things as “fierce (or, more commonly, wrathful) deities” in various Buddhist traditions, I am not analyzing the entity named the “Fierce Deity” in Majora’s Mask as an instance of a Buddhist wrathful deity: rather, I’m saying that that character in the game bears similarities to a regular Buddhist God and analyzing it accordingly.

There may well be interesting alternative interpretations that take the Fierce Deity character in Majora’s Mask as an instance of a Buddhist wrathful deity, but that’s not an aspect of my interpretation here, and I feel that there are enough data in the game (as I discuss in the article) to warrant analyzing that character as a God, regardless of the nominal similarity between it and the Buddhist notion of a wrathful deity.

I hope that helps to clear up, for you, what my approach in this analysis is! What you call a “false implication” isn’t the case, simply because I’m not endorsing the supposition that the Fierce Deity in Majora’s Mask ought to be interpreted as a Buddhist wrathful deity within a Buddhist reading of the game. Thanks for commenting, and I hope you get the opportunity to enjoy and engage with the rest of With a Terrible Fate‘s analytical library as well.

Oops.
I thought you were equating them with Deva!
You’re right, that’s totally on me!
You’ve corrected my correction! Haha

Personally, I actually do interpret it an actual Wrathful Being.
But if you’re just straight up interpreting it as a God, that makes a lot more sense.

Yes, I do intend to peruse more of this resource at a later date, there’s clearly a lot of love put into this site!

Sorry for the late reply!

No worries! Yeah, one of the things I love about Majora’s Mask is how amenable it is to multiple interpretations, even within the context of a specific interpretive lens such as Buddhism.

I really appreciate that you recognize the love put into this publication: it’s a volunteer effort solely focused on analyzing what makes the storytelling of video games so great, so it’s always refreshing to meet like-minded gamers who recognize the value of this kind of work.

Don’t be a stranger!