Along with video games, I also love music.  As a matter of fact, I spent much of my childhood alternating between playing Final Fantasy and playing the piano.  But for some reason I spent most of my life so far thinking that games and music were entirely different domains; the music I played on piano was usually not the music I listened to while I played a game.  Over the past few years that’s changed.  I’ve started playing songs from games on the piano, and writing arrangements of some of my favorite pieces.  It’s become abundantly clear to me that music and games are not separate– that the songs that I played on my instrument from games were as compelling as the ones I learned elsewhere.  And that idea got me thinking further.  What connections were there between video game music and other genres of music?  And as I was thinking about it, suddenly I made a connection between two very unrelated things: the musical Evita, and Xenoblade Chronicles.

A few weeks ago I was sitting in the audience of Evita, my favorite musical.  It caught my ear five years ago when I noticed the incredible use of theming in Andrew Lloyd Webber’s music.  Webber does a beautiful job of creating recurrent concepts and shifting emotions throughout the musical by making use of repeating musical motifs—that is, recurring rhythms, chord patterns and melodies.  Good theming connects these musical ideas to characters, themes, and emotions in the play.  The story of the musical, then, is the intersection of the musical ideas with the action and speech onstage.  More specifically, the music draws thematic and narrative connections for the audience that can expand upon or even contradict the verbal and physical actions created on stage.

By way of example, I point to one particular theme that appears in the song “I’d Be Surprisingly Good For You.”  This song is structured around a jazzy melody that repeats roughly five times before the song ends.  The audience becomes extremely familiar with the melody by the end of the song.

The melody takes on a particular thematic association throughout the course of the song.  When the song plays in Act I, Evita, a poor Argentinian woman gaining power in Buenos Aires through affairs with powerful people in the city, meets Colonel Peron, who within a few months both marries Evita and becomes President of the country.  The song is Evita’s completely successful attempt to seduce Peron.  But she does not seduce him purely through flirtation.  Her success also comes from her ambition—from what she claims she can offer to Peron politically.  As she points out to Peron, “I’d be surprisingly good for you.”  The melody of the song then becomes associated with both Evita’s sensuality and her intense political ambition.

In Act II of the musical, the melody reappears, bringing with it all the thematic associations present in the previous act.  It arrives while Evita, whose health is rapidly failing her due to her cancer diagnosis, tells Peron that she intends to run for Vice President in spite of her sickness.  This time, however, when the melody plays, it’s slower, the instrumentation is more somber, and, instead of finishing on a jazzy major chord, which would evoke a sense of inspiration, the melody finishes on a minor chord, which, far from inspiring, evokes despair.  And when this chord hits, Evita collapses to the ground, for the first time making clear to the audience her failing health.  The combination feels like a punch to the gut.  Not only does the audience see Evita collapse to the ground, but the audience can also feel the thematic sensuality and ambition of Evita collapse when the theme associated with those concepts falls apart.  Webber uses the music of Evita to make her spirit fall apart as her physical being on stage falls apart; in this way he has used music to thoroughly enhance the narrative. 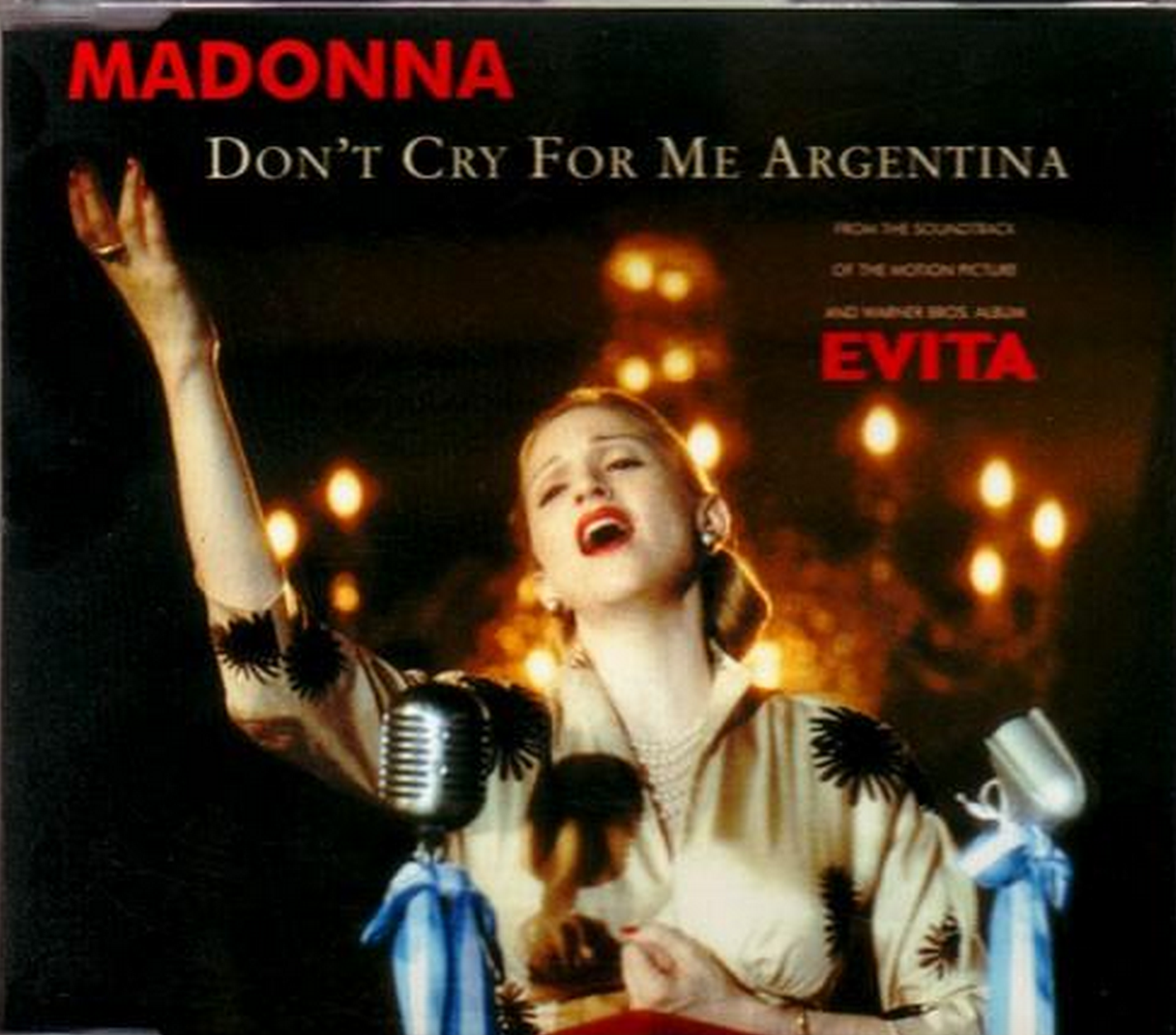 At this point I imagine my reader is wondering, “why did Nate write an article that focuses so much on musicals on a site about video games?”  As mentioned in the introduction, it’s because music is an essential part of video games as well as musicals.  The player’s aural experience while playing a game can bring out thematic connections, intense emotions, and thoroughly enhance the narrative occurring onscreen, just like it does in musicals.

I’ll again show what I mean by way of example.  Xenoblade Chronicles features one of the best scores that I’ve heard in a game.  It’s full of pained violin melodies and complicated electronic motifs, fueling the themes of hatred, loss, and autonomy present throughout the game.  What makes the soundtrack remarkable, besides it just being incredibly beautiful, is how the music matches up with the narrative occurring on screen.

In a major battle early in the game, Fiora, the love interest of the main character, Shulk, sacrifices herself to save his life.  She dies at the hands of the Mechon, a race of machine creatures that kill humans for (what seems at that point in the game) no apparent reason.  After her untimely sacrifice, Shulk and his best friend Reyn have a conversation about how to move on with their lives.  It’s at this moment in the game that the ostensive plot emerges:  Shulk declares that the Mechon must pay and he will “kill them all.”  But Shulk does not yet realize that his decision is naive and actually counterproductive.  Late in the game Shulk finds out that one of the few survivors of a race of machine-humans actually built the Mechon in retaliation for the almost-complete extermination of his people at the hands of humans.  In deciding to kill all the Mechon, Shulk would only be contributing to the cycle of violence, rather than seeking an end to it.  Shulk’s decision to kill the mechon contradicts Shulk’s real goal of creating peace in his world.

Yet Shulk is aware of the contradiction to an extent.  He describes “two versions” of himself: one that chooses to follow the advice of his hero, Dunban, and “treasure the life” that Fiora gave Shulk by sacrificing herself, and another that says that Shulk should “make [the Mechon] pay,” that he must “kill them all.”  He describes the latter voice as getting louder and louder.  Eventually the second voice wins out, but the decision never feels satisfactory due to the existence of both voices. 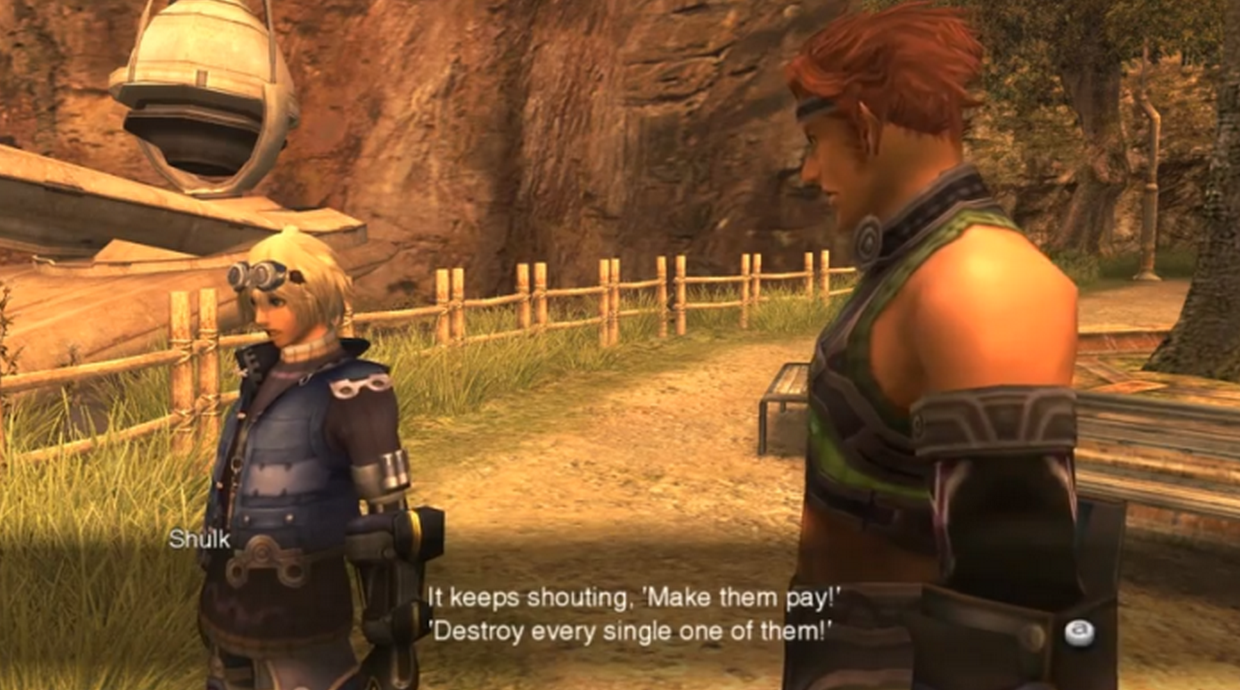 The soundtrack that plays during this scene makes the contradiction more apparent.  Right after Shulk says, “it won’t stop getting louder,” a crescendo builds in the music, mirroring the voice in his head, and the violins sweep up toward triumphant G major chord.  But then something goes wrong.   Instead of going up to a G, the violins stay on F#, creating a G major seven chord, which is far more dissonant than a regular G major.  In terms of chord structure, the G major seven functions very similarly to G major, so the moment of triumph is still there, but even to the untrained ear, there’s something noticeably off about it.  Shulk has made a decision about how to react to Fiora’s death, but the music suggests, correctly, that it might be the wrong choice.

It’s important, though, that so much of the doubt about the choice exists in the music, rather than a more explicit, verbal form of storytelling.  Since Shulk doesn’t yet know the truth about the Mechon, he still believes at this early stage in the game that he’s making the correct choice.  In order to preserve the drama of late-game reveal, the fact that Shulk is making the wrong choice can only be hinted at. This type of foreshadowing is extremely difficult to do in words while preserving genuine suspense on the part of the audience, but music is perfectly suited for the job.  It communicates the message, “something is wrong here,” without explicitly giving away what is wrong.  The only thing the player can glean from this moment in a first-time playthrough (unless they’ve read this article, I guess), is that the music is not as triumphant as she anticipated.  The entire truth is still a mystery.

I choose to present both these examples, Evita and Xenoblade, in the same article because they share a similarity I find crucial to a great soundtrack for any medium.  They both make use of defying musical intuition to make the narrative more impactful.  In the case of Xenoblade, most listeners will expect the chord they are listening to right before the climax to resolve to G major, but it does not, and the fact that it does not can be felt, and creates a wonderful bit of doubt about Shulk’s decision.  In Evita, hearing the same theme with a different chord is extremely noticeable and draws attention to the differences present in that particular moment as compared to the past.  Changing the chord at the end brings out in firm clarity Evita’s failing health.

And there’s one more reason I chose to compare a video game with a musical.  Video games, ever since they started incorporating music, have made extensive use of musical themes.  For example, nearly everybody knows the Super Mario theme.  Video games then are in a fantastic position to make use of theming techniques, such as the ones in Evita, to create emotional experiences for the player.  Making use of a musical moment like the one I described in Evita made Xenoblade a better, more impactful game.  To make better games, perhaps creators should lend an ear to the techniques used in musicals.