If you’ve been following E3 or care one iota about “Final Fantasy” or gaming, then you have probably already seen the following video that Sony released at the expo.

Now, it’s not standard protocol at With a Terrible Fate to post reactions to current news — but fans will know that exceptions have been made in the past for exceptional circumstances.  A remake of “Final Fantasy VII” qualifies in that regard.

There are many things I could say and will say about the game in due time.  In many ways, dated as it now is (yes, it was released in 1997), it marks the pinnacle of role-playing video games as traditionally conceived.  For now, I will dwell only on one point, which, although it has yet to formally appear on the site, has tacitly informed a lot of my work thus far:  namely, I believe that key aspects of “Majora’s Mask” stand on the back of “Final Fantasy VII” and its groundbreaking work in the medium. 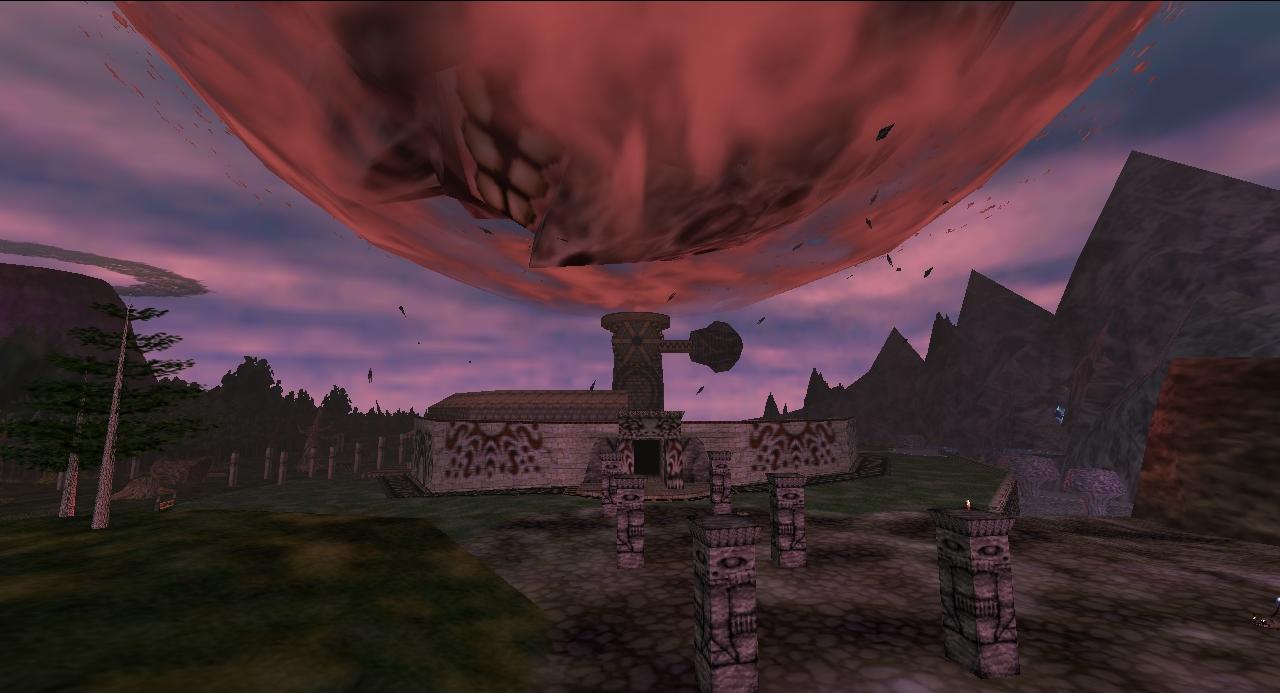 There’s a pretty well-known theory about “Majora’s Mask,” far afield from my own work on the game, that describes Termina as the various stages of grief:  Clock Town is denial, Woodfall is anger, Snowhead is bargaining, Great Bay is depression, and Ikana Canyon is acceptance.  The idea is that Link has actually died chasing Skull Kid in the woods prior to entering “Termina,” and Termina is actually Link coming to terms with his own death.  It’s an interesting notion, and I won’t go out of my way to respond to it here.  What’s important to note is that it turns on the entire world of Termina manifesting as a personal journey for Link.  And in this way, it is rather similar to my own analysis of the game — for I, too, conclude that Termina as a world is constituted by the act of Link encountering it.  The physics of Termina seem to demand that the world be understood as some sort of representational content that is generated by Link, as an agent.

Why does this matter to “FFVII”?  Well, buried deep inside an epic saga spanning an entire world, a Meteor, and a cast of characters featuring one wing, one arm-gun, and one red beast, there’s one small section that ensnares the player and subverts her concept of the kind of world in which a game is embedded.  After Ultimate Weapon attacks the town of Mideel in the game, main characters Cloud Strife and Tifa Lockhart are thrown into the Lifestream — the lifeblood of the world, from whence all life came and to which it is ultimately returned.  When this happens, Tifa finds herself within a surreal world, which turns out to be the Cloud’s subconscious.  Rendered mentally unstable by experimentation (experiments that were a part of the Jenova Project), Cloud’s very identity has fractured into pieces, seemingly beyond repair.  At this point, the player takes control of Tifa, and the entire focus of the game shifts:  instead of saving the world and stopping Sephiroth’s rampage of destruction, your goal is merely to put the pieces of Cloud back together again. 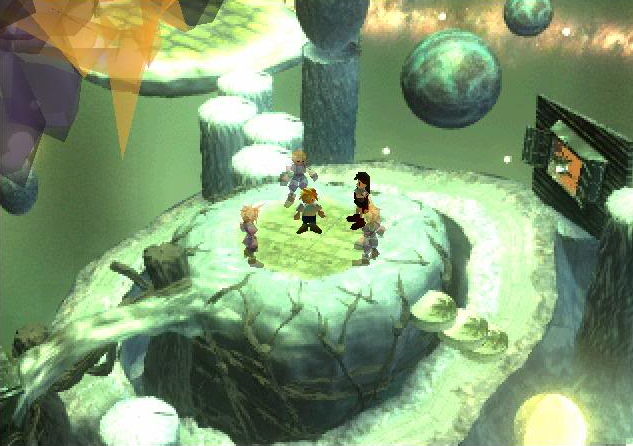 This is by no means what “FFVII” is most remembered for, nor is it what it does best.  But it is a single example of how you can turn the game over and over in your hands and always find the light catching some new marvel that you never noticed before.  The game manages to convert its themes of mass destruction, threat of persecution, and threat of nihilism into the microcosm of a single person’s psychology.  Inside Cloud’s mind, with the specter of an unconscious Cloud floating in the background of the world, all the weight of a Final-Fantasy-level mission is hoisted onto a single girl with the singular goal of helping her friend not lose his mind.  There is no real combat to speak of; every path through Cloud’s mind is a different piece of his past, which together reconstitute the truth about how he became the vestige of a person that he now takes to be an identity.

Does that remind you of anyone else — one, perhaps, who wears a little green cap? 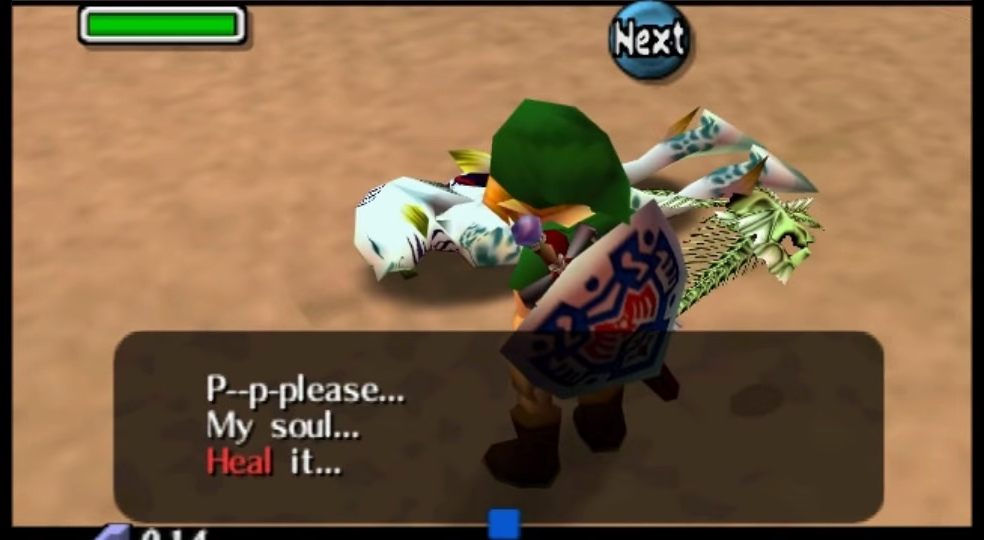 Whether or not you take seriously a model of Termina as literally psychological, it’s fairly apparent that it’s at least susceptible to that interpretation.  And prior to that kind of claim, it’s clear that the universe of “Majora’s Mask” is hugely concerned with questions of identity and healing broken psyches.

The architecture of Termina:  in the center is a town full of people with seemingly hopeless problems, and a desperate, lonely child — Skull Kid.  Skull Kid can only be saved by the player traveling to every corner of Termina, learning the history of the people there, healing the souls of fallen heroes, and liberating tormented giants from the cursed masks that sealed them away.  By bringing those giants to the center of the world, Majora’s Mask can be stopped — Termina can be saved from falling apart.

The architecture of Cloud’s subconscious:  in the center is Cloud — unconscious, his sense of self broken.  Cloud can only be saved by the player traveling to every corner of his subconscious, learning the history of Cloud’s past there, and restoring every fractured piece of Cloud that is found in these locations.  By bringing those pieces to the center of the world, Cloud’s breakdown can be stopped — he can be saved from falling apart.

I would certainly not claim that “Final Fantasy VII” was the first piece of literature to explore notions of the subconscious, nor is it necessarily the case that Aonuma &co explicitly looked to it when developing “Majora’s Mask.”  But if nothing else, Cloud’s subconscious gave us the basis for understanding and approaching games as explorations and analyses of psychology and identity, rather than as mere ‘alternate worlds’.  If the idea seems done-to-death now, I would offer that this is at least partly due to how strikingly well Square did it in the first place.  Needless to say, I eagerly anticipate how they handle the world of Cloud’s mind in the remake to come.

Earthbound was released in 1994, prior to Final Fantasy VII, which was released four years later, and already let the player have a glimpse of the main character’s psyche.

For those who haven’t played it, there is a stage called Magicant. It takes place inside the protagonist’s mind.

Thanks for reading and commenting, Caio. I agree with you that both “VII” and “Majora” surely owe much to “Earthbound”; what I was interested in here in particular was the notion not solely of the psychological as represented in games, but more specifically of game storylines describing a reconstitution of a fractured or broken self from its constitutive pieces. This is something that I see strongly present in “VII” and “Majora”; I see Magicant as more focused on conquering the darkness manifest in Ness’s Nightmare, which calls to mind modern parallels more along the lines of “Kingdom Hearts” — or Dark Link, to stay within the “Zelda” franchise. There are, of course, many similarities between both of these types, but I feel the separate focus is enough to merit distinct attention paid to each on its own terms.
I hope you enjoyed the article; thanks again for contributing to the discussion.

Hi Suduiko! Thank you so much for the article and for your response. You made a perfectly valid point by differentiating the two types of games cited, i.e., Earthbound, Kingdom Hearts, Zelda versus FFVII, Zelda. For instance, the different places of Eagleland don’t represent aspects Ness’ mind, neither they serve as a quest to collect pieces of a shattered self.

Hi Suduiko! Thank you so much for this analysis, and for creating With A Terrible Fate. I first came upon your website after seeing your Buddhist approach on Majora’s Mask on my news feed on Facebook, and I found it a wonderful read! I was thinking about our last exchange, and I couldn’t stop myself from thinking what were your take on Your Sanctuary locations, in Earthbound. As off-topic as this may sound, what I think is that it offers us a glimpse of future role-playing games using the game structure to represent the recollection of a shattered self, like Ness reminiscing about his past each time he beats a boss and collects another fragment of the song. E.g. ‘Ness saw himself as a baby,’ (sic) ‘Ness saw himself playing with King,’ (sic) etc.

P.S. Having read the Dathen Boccabella’s take on Majora’s Mask and The Five Stages of Grief around two years ago, if I recall correctly, it is not as if Link had died and the game is about him trying to cope with his own death, but his grief is related to him missing his friend Navi, [spoiler] who left him in the end of OoT. [/spoiler] In Brazil we have a word to describe the missing of someone, in the expression ‘sentir saudades.’ As someone described it, the word ‘saudades’ can be translated as the ‘love that remains’ after the departure of a loved one. 🙂 I wonder if I could say Majora’s Mask is all about ‘sentir saudades.’

Great to hear from you again, Caio. Very glad you’re enjoying my work. I think that you are right on the money to zero in on “Earthbound” as a genre-defining game; I have my own thoughts on it, but am going to prescind from saying more about it here — it would be too much to fit into one comment. But: keep your eyes open, and you might just see an article about “Earthbound” on WaTF some time soon.
To clarify, when I spoke about the theory of Link being dead, I was referring to the internet theory popularized by the YouTube channel Game Theory, in which it is argued that Link is in fact dead (a theory, by the way, which I find horribly confused and misguided). You can check it out here if you’re interested: https://www.youtube.com/watch?v=7S1SVkysIRw. You’re absolutely right that a theory about Termina representing the stages of grief doesn’t commit you to a view of Link as dead in the game; and, while I’m not convinced that Termina is literally meant to represent the stages of grief, I certainly see the merit to a view of its story telling the tale of Link coping with the loss of Navi. That view is pretty explicit within the game, and I think the narrative does a masterful job of helping the player, along with Link, come to terms with that loss.
I have not read the Thompson essay you mentioned, but I will certainly take a look now that you’ve mentioned it.
Thanks again for reading and commenting on my work — I do hope you continue to do so in the future.