“Darkness is a beginning, not an end.” -Master Xehanort, “Kingdom Hearts:  Birth by Sleep”

Personally, I’m at a loss to express my feelings about Leonard Nimoy leaving us today.  Yet given that this site is the home of video game analysis, I have been back and forth debating how, if at all, to express my sentiments about him in this space.  Ultimately, I’ve decided to pay tribute to a man who has hugely impacted so many by offering a brief discourse about the value of voice actors.  For among the many hats that Nimoy wore over his career, one of the most notable in my mind was that of peerless voice actor, and the voice of a character that has framed a franchise. 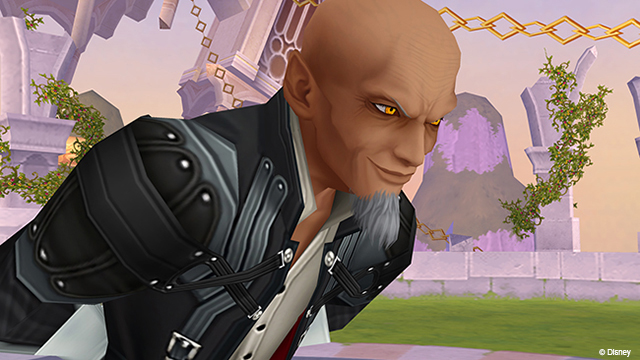 Master Xehanort has only explicitly appeared in two of the “Kingdom Hearts” games — “Birth by Sleep” and “Dream Drop Distance” — and yet the architecture of the series’ entire plot line is, at this point, almost entirely his design.  This is not the time to begin a full analysis of the series, though that time will soon come; suffice it for now to say that he is the archetypal villainous kingpin who rearranges the entire universe according to his machinations.  Ganondorf storms the Temple of Time to try to take over Hyrule; Xehanort reformats time itself in order to create the ultimate χ-blade and multiply himself by XIII, ultimately aiming to open the door to the Keyblade War.  (This also isn’t a unique occupation for Nimoy’s characters — in J.J. Abrams’ Fringe, he played William Bell, who went to the ends of time and space to literally create his own universe.)  And the voice of this charismatic, devious mastermind is Leonard Nimoy — but, one might ask, what difference does a voice actor make to a video game?  After all, I analyzed “Legend of Zelda:  Majora’s Mask” for months, and “Zelda” games don’t even have traditional voice acting.

Voice actors make all the difference to a video game, and I want to point to a single moment demonstrating why the choice of voice actor for Master Xehanort was crucial to the experience of “Kingdom Hearts.”  In “Birth by Sleep,” there is a single moment at the climax of the game when the three protagonists — Ventus, Terra, and Aqua — confront Xehanort in the Keyblade Graveyard; Xehanort, by means of identifying Ventus with his destiny to become part of the χ-blade, points a single finger at him and barks out the words, “χ-blade!”  This moment is at the same time riveting and almost a non sequitur:  the player is jolted from the narrative to bear witness to the villain identifying one of their avatars as a mere plot object.

Why does this matter?  One reason why “Kingdom Hearts” is a wonderful series is that it can be read on so many unique interpretive registries; yet at the same time, these registries are strung together by questions of identity.  The climax of the first “Kingdom Hearts” is a battle over what Kingdom Hearts is:  light or darkness.  There are questions of what constitutes your identity if you lose your heart, or if you lose your soul.  There is a constant tension between the bonds of friendship and the quest for individuation.  And, at the center of it all, there is a mastermind pulling together every corner of the universe to mold everything in his image. 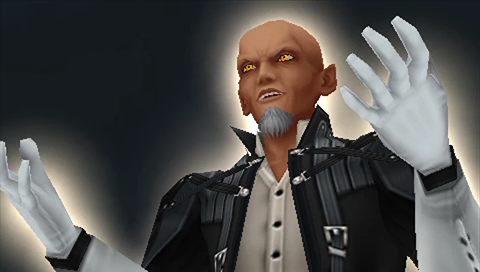 The player turns on their game console, enters the world of a game, and expects some level of control.  A major difference between games and movies is that the player of a game is able to move the storyline along by virtue of engaging with that story; in the case of “Kingdom Hearts,” the very same stories that were once straightforward Disney movies become elaborate, interwoven epics dependent upon the player and the protagonists.  But this authority is not absolute, and voice acting reminds us of this.  The vehicle of language within a game, spoken to the player as if by another person, implies that the player is not alone in responsibility for the world and its events — rather, the player’s actions are part of a dialectic with the voices already vying to be heard within the game’s discourse.

Master Xehanort is the paragon case.  Arriving innocuously and quickly sprouting of everywhere in countless forms, he infests the game while delicately taking control of the metaphysics, to the point at which he points at Ventus — in effect, at the player’s conduit to the game’s world — and says that yes, even the very player of this game is subordinate to my vision.  The cinematic choice here is on-point because the player actually experience the moment of Xehanort point at Ventus as seen through Xehanort’s eyes, as though he is subsuming the player’s perspective itself, threatening to make you, the player, yet another Xehanort.  This is the ultimate thrust of what you must fight against in the series, and what makes it such an epic struggle.

Needless to say, it is crucial that the voice chosen for this role matches the aesthetics of the mastermind who subsumes the game’s very mode of existence.  Nimoy was peerless in this regard.  Searingly incisive with his diction, whimsically sinister as he tossed around phrases like “feckless neophytes,” Nimoy as Xehanort was subversive and enthralling because his voice was simultaneously sympathetic and abrasive.  He was at once the Boston local who had been around the block, and the undaunted master of time and space, scheming with the mind of a metaphysician and the spirit of a Disney villain.  I challenge anyone to listen to his rhetoric and try to escape its magnetic draw, the sensation of a voice that envelops you like darkness itself. 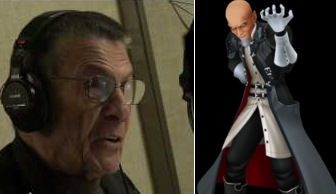 I offer analysis because, as an analyst, this is what I have to give; but the truth is that Leonard Nimoy knew how to move people far beyond the realm of the analytic.  His voice was the hallmark of quality work, and his presence was enough to completely transform the atmosphere of a story.  Again, I am at a loss, and can only say this by way of closing:  thank you, Leonard Nimoy, for all the works of art you left us; you will never be forgotten, and will always be missed.